One year later... Survivors of the Water Park Explosion share their stories of recovery 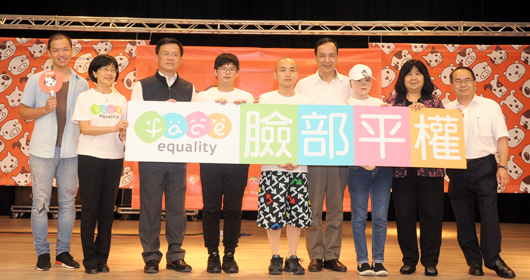 Sunshine Foundation has continued to promote Face Equality during an "encore" exhibition of its Face Equality installations, this time held at the 435 Art Zone in New Taipei City. The event also coincided with the one year anniversary of the Formosa Fun Coast Water Park Dust Explosion, and survivors of the explosion currently undergoing rehabilitation at Sunshine Foundation took to the stage to share their rehabilitation experience, as well as unveil a preview of the documentary film about their ordeal.

One of them is Si-Chia, who is a 20-year old burn survivor from the Taipei Water Park Explosion. She sustained 3rd degree burns over 75% of her body, including arms, legs and face. After being unconscious for 2 months, she was finally discharged from hospital in September 2015. Unfortunately, scar contracture had begun deforming her hands and she wasn’t able to take care of herself. Her parents had to help with wound care, which took at least 6 hours to complete. Si-Chia has always been independent. But after her injury, she had to depend on her parents for eating, walking, showering... She hated having to be a burden on them.

In order to regain her independence, Si-Chia joined the New Taipei Sunshine Half-Way House and with the help of care attendants, she is slowly re-learning how to care for herself, how to live with her scars and accept her new appearance . In the documentary preview she says: "When I go out, I wear a mask and take it off to eat in front of everyone. These scars are very meaningful to me because in exchange, I got my life back."

Si-Chia and the other burn survivors are progressively learning how to live with their scars and they are building their confidence to face the world, but at the same time, they hope that society will treat them fairly and with respect, and not judge them based on their different appearance. That is why continuing to promote Face Equality while people remember last year's explosion is so meaningful to them.

You can also download the latest report on Sunshine's services for the survivors of the Formosa Fun Coast Water Park Dust Explosion.