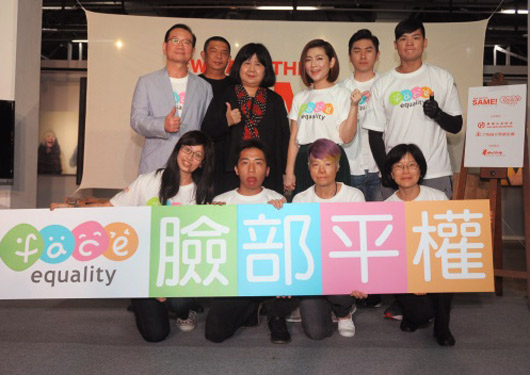 To mark the event, Sunshine unveiled on May 6 a new short film to highlight the prejudice and discrimination burn survivors and people with facial disfigurement are sometimes subjected to.

See the Face Equality film here. It has already been viewed over 1.2 million times and shared by many people, including President-Elect Ms. TSAI Ing-Wen.

This film is about apartment-hunting, but it also could have been about applying for a job, getting a seat at the restaurant or any other situation in which burn survivors are confronted to subtle prejudice or open discrimination.

This film is about apartment-hunting, but it also could have been about applying for a job, getting a seat at the restaurant or any other situation in which burn survivors are confronted to subtle prejudice or open discrimination.

The actor in this film is 18 year-old Chi-Hong who was injured last year during the June 27 Formosa Fun Coast Water Park Explosion. Having sustained burns over 80% of his body, Chi-Hong had to interrupt his studies and is now undergoing intensive rehabilitation at Sunshine Foundation. During the Face Equality Day celebrations held in Taipei, Chi-Hong shared how this issue resonated with him and why it was important for him to be part of this project. Although society is still full of warmth and generally accepting of differences, inevitably, there are still some people who do not understand what burn survivors must go through to return to a normal life. Chi-Hong says: “Some people will say we were injured as a retribution for bad karma from a past life. Others say we were injured because we’re kids who like to party and have fun instead of staying at home to study. We didn’t ask for this to happen to us. We, and any person for that matter, should be treated with more empathy, respect and friendliness.”

This year’s Face Equality Day activities were held from May 13 to May 15 at Huashan 1914 Creative Park, and consisted of the creative exhibition WE ARE THE SAME that attracted 15,000 visitors. The exhibition combined artistic installations, musical performances, interactive activities and discussion forums to help raise the public’s awareness about the importance of respecting diversity in society, notably diversity of appearance. The highlight of the event was the exhibition of photographs taken by Mo Chen under the concept of “twins.” Each photograph features two people, one with facial disfigurement and one without, who pose in a way to show how deep inside, we are the same.

The campaign for Face Equality was launched in the UK by the British charity Changing Faces and starting in 2011, Sunshine Foundation has been promoting Face Equality in Taiwan through social education and advocacy. Since 2014, Sunshine has been celebrating “Face Equality Day” on May 17. Face Equality is about believing that every face is different and unique, that irrespective of facial appearance, every person deserves to be treated fairly and equally and that the value of every person should be determined by their unique contribution to society, and not by how they look.