Taiwan signed the United Nations International Convention on the Rights of Persons with Disabilities (CRPD) and completed domestic legislative procedures to actively promote the rights and interests of persons with disabilities, based on the "human rights model" of disability.The governments of the signatory countries submit national reports to the international committee for review every four years to examine the implementation of the Convention. Non-governmental organizations and persons with disabilities can also put forward monitoring opinions and suggestions to the governments and international committees through a shadow report. 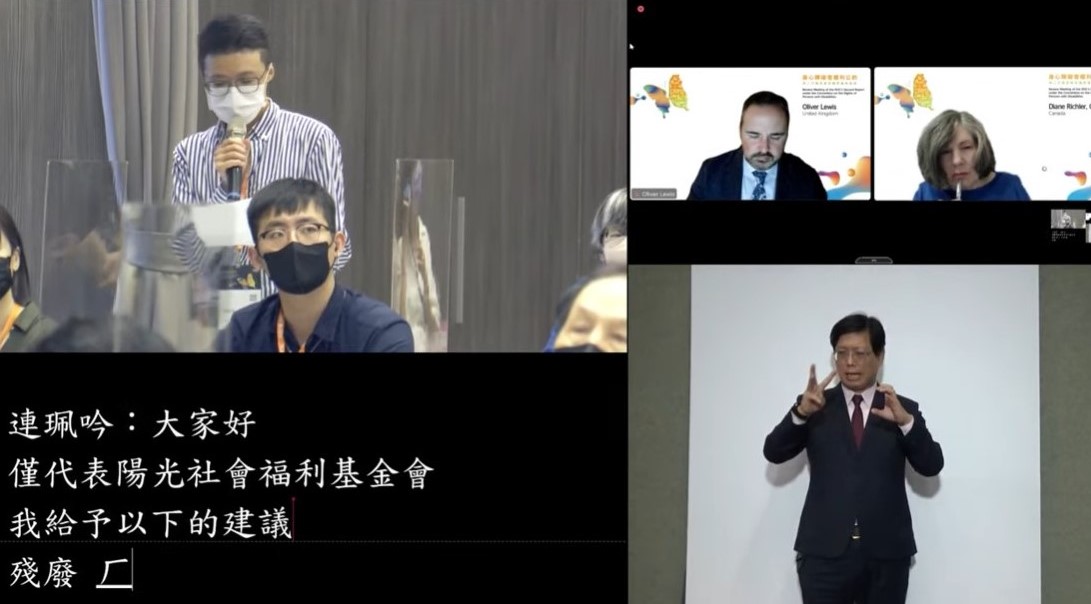 As a representative of Sunshine Foundation and a person with a visible facial difference, LIAN Pei-Yin made a speech during the review meeting that focused on the implementation of Article 8: Awareness Raising. She pointed out two suggestions:

In addition to avoiding direct discrimination, Sunshine Foundation proposed that special attention should be paid to implicit discrimination, especially how implicit discrimination is perpetuated by media reports that often make negative assumptions about a person or their abilities based on their different appearance.This is a frequent issue encountered by people with facial disfigurement or a visible difference. LIAN Pei-Yin mentioned the example of an interview with a journalism graduate who sustained facial burns. The news report stated that she could not have the opportunity to work in a TV station, because of her "burns and disfigurement, her dreams of being a news anchor are broken". This kind of discriminatory reporting implies that a burn survivor who graduated in journalism could never become a news anchor because of her different appearance and fails to take into consideration the skills, strengths and abilities that are required for the job and that the person possesses. This kind of reporting perpetuates implicit stigmas and discrimination based on appearance, which limit the self-realization of those who look different, and it will also increase social prejudice against those with disfigurement.

Facial Equality is a basic human right, and its spirit is in line with the human rights model upon which is based CRPD. Sunshine Foundation promotes Facial Equality in Taiwan and encourages people with different appearances to participate in CRPD-related policy discussions, so that the voices of people with facial disfigurement or visible differences be heard by relevant government bodies, and that the issues or problems our community faces receive due attention.